Catholic schooling began in the 1800’s “in a spirit of protest,” when Church leaders objected to the discrimination of Catholic children, and did not want their children indoctrinated in Protestant and secular settings. Disregarded and denigrated by state legislatures, the Church leadership turned to its congregations, demanding that every parish build and support a school and that all Catholic families enroll their children in their parochial school. The result was the largest private school system and alternative to public schooling in the U.S. In many communities, parochial schools are entirely supported by a largely working-class minority population. Parents scrimp and save to send their children to parochial school because it matters to them and they want it to make a difference in the formation of their children.

For many working-class families, the Catholic schools are the only alternative to public schools that they can afford. And in many areas of the city, the parish school down the street has become the neighborhood school. Additionally, the enrollment of non-Catholic students in Catholic schools has been rising nationwide for the last several decades. Collaboration exemplifies the wide support for accessibility to Catholic Education in many of our communities, where the U.S. Catholic School system has historically produced successful students from immigrant, poor and medium-income family backgrounds. The mission of Catholic Schools is to provide the skills to successfully complete high school and prepare students for college. While Catholic Schools are not equipped to provide education for students with special needs, the curriculum does include scaffolding, differentiation and adaptation to meet the student where they are with the interest of moving him/her forward with learning and comprehension skills. Successful professionals across disciplines can be found anywhere and in great numbers you might find that their education has a Catholic School base.

Studies have demonstrated that anywhere in the U.S., for example, a Latino student who attends Parochial School has 45% increased chances of graduating, in comparison to his/her counterpart in the public school system. These schools also have great success promoting students from Catholic elementary schools onto Public high school, where students are able to succeed because Catholic schools are known to teach good study habits and develop student values that make them a good role model and positive influence in any environment. In full circle and in the similar spirit of protest that began Catholic schooling, leaders are now called to ignite Church concerns related to the material and cultural discrimination of Latino and African American communities today.
This to suggest that the Church must take a proactive leadership role in creating the conditions by which undeserved communities can reflect and act upon the importance of education. How are Catholic Schools successful? What are the influencing factors to their success and why is Catholic School a viable option for parents? Why does this financial investment make sense? How can Public and Catholic Schools continue collaborating for the success of our cities, towns? 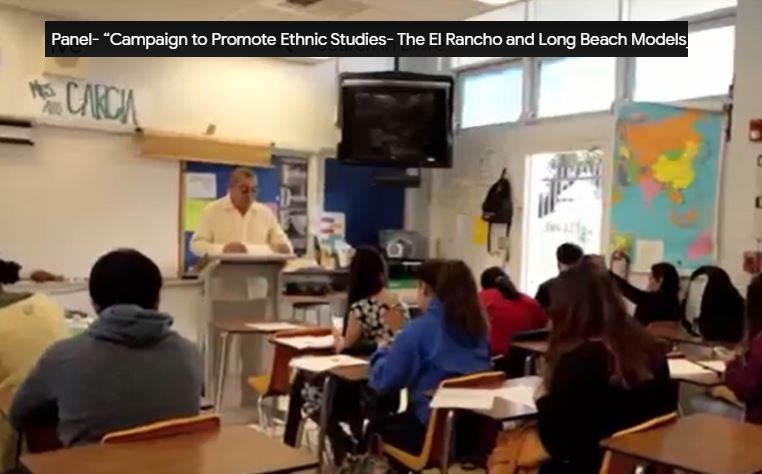 This presentation has been made possible by the California-Mexico Studies Center, El Rancho Unified School District and LEAD, as co-conveners of the Campaign to Promote Ethnic Studies Summit on October 18, 2014, at CSU Long Beach.    The CPES Summit was webcast by LEAD throughout its worldwide network and prompted the Los Angeles and San Francisco school districts to adopt policies similar to the historic El Rancho USD’s resolution approved in June 2014, as the first Ethnic Studies graduation requirement by a local school board in California. Since the CPES Summit, 15-20 more local school boards have adopted comparable Ethnic Studies policies throughout California, including the Santa Ana, Montebello, Bassett and Woodland school districts.    This panel will present on the progress that has been made at El Rancho USD, to build upon their landmark resolution a comprehensive Ethnic Studies curriculum, and the also precedent-setting Long Beach Ethnic Studies Program (LB-ESP) that has created a model for school districts to offer ethnic studies H.S. and college-credit courses on Saturdays. The LB-ESP builds upon the nationally recognized Long Beach College Promise relationship between the LBUSD and CSULB, supported with a 5-year funding commitment by LBUSD, to offer high school students at least 12 college-credit Ethnic Studies courses every semester.   The panelists will discuss in detail how these initiatives came about, their benefit and replicability, and answer questions related to the Campaign to Promote Ethnic Studies’ goal to promote Ethnic Studies for all students in the K-12 curriculum, throughout California and the United States.        Introduction / Moderator: - Idali Lopez, San Bernardino High School Program Specialist and SBCUSD Ethnic Studies Committee Facilitator        Panelists: - Dr. Aurora Villon, School Board President, El Rancho Unified School District - Prof. Armando Vázquez-Ramos, President, California-Mexico Studies Center - Tino Gutierrez, El Rancho ... 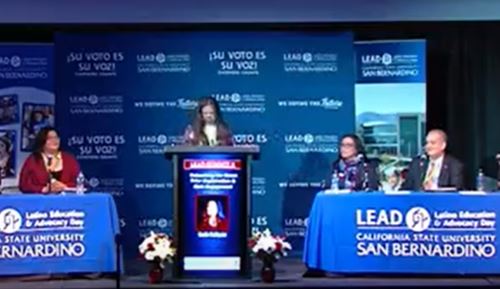 The time is now for Latinos to unleash the giant, energized and empowered, and reflective of the growing diversity in the United States. It must begin with exercising our right to vote. We can only edge closer to true representations of our community when we use our vote as our voice, so our presence can not only be felt in the electorate, but public policies can better resemble and reflect the needs of our community. As educators, advocates and leaders we must all work together to engage the next wave of voters, Latinos or otherwise, so as to build a civic society and representative democracy inclusive of all our interests. The panelists will discuss efforts to promote the broader movement for social and economic justice through increased civic participation, working with community-based, educational, religious, labor, and other organizations seeking to build civically cognizant and active neighborhoods. Among the topics are increasing voter registration, the need for practical and targeted voter education, critical engagement and participation rates, and organizing and exposing Latino youth and community members to social change opportunities and long-lasting community power.   Introduction / Moderator: - Cecile Dahlquist, Board Certified Family Nurse Practitioner, Student Health Center-Palm Desert Campus, and Doctoral Candidate-Cohort 11, Educational Leadership Program, CSUSB Introduction / Moderator   Panelists: - Janet Bernabe, Riverside Regional Coordinator, Mi Familia Vota - Luz Gallegos, Community Programs Director, TODEC Legal Center - Francisco J. Solá, Chair, Latino Voter Registration Project   This segment is date/time stamped: March 28, 2019; 11:15AM   Recommended Citation: CSUSB - Latino Education and Advocacy Days (LEAD), "Panel Discussion: “Unleashing the Giant: Voter Registration & Civic Engagement”" (2019). Latino Education and Advocacy Days (LEAD) Video Recordings. 20.https://scholarworks.lib.csusb.edu/lead/20 ... 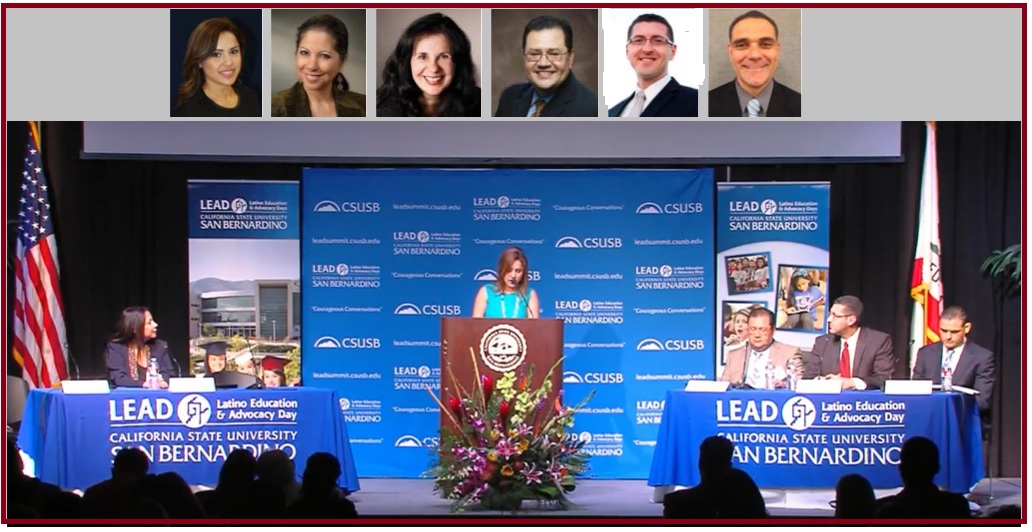 The quality of the future U.S. labor market depends on both education and job skills, and, if the United States wants to remain competitive, our ability to produce high levels of educated and skilled workers is critical to the overall performance of its participation in a global economy. The increasingly globalized economy also means that the U.S. is facing more competition as other nations increase their skills in the STEM subjects (science, technology, engineering and mathematics). Increasing the representation of Latinos in STEM fields is therefore absolutely vital to the economic and scientific advancement in the United States, as Latinos accounted for more than 50% of our country’s population growth during the last decade. Yet only 8% of Latinos nationwide graduate with a bachelor’s degree in a STEM field. This panel of industry experts and college administrators will discuss challenges and best practices for creating successful community college-to-four-year college pathways in STEM fields for Latino students. Introduction: - Jessica G. Mendoza, Coachella Valley High School Teacher - Department of Mathematics, and Doctoral Candidate, Educational Leadership Program, CSUSB Panelists: - Pilar Montoya, CEO, Society of Hispanic Professional Engineers- Dr. Gisele Ragusa, Associate Professor, Division of Engineering Education, Viterbi School of Engineering, University of Southern California- Marvin Martinez, President, East Los Angeles College- Emanuel Pleitez, Strategist, Qlovi and Chairman, Hispanic Heritage Foundation Moderator: - Dr. Gustavo Chamorro, Deputy Sector Navigator, ICT/Digital Media – Rancho Santiago Community College District This panel is date/time stamped: March 27, 2014; 11:20 a.m to 12:00 p.m. ...