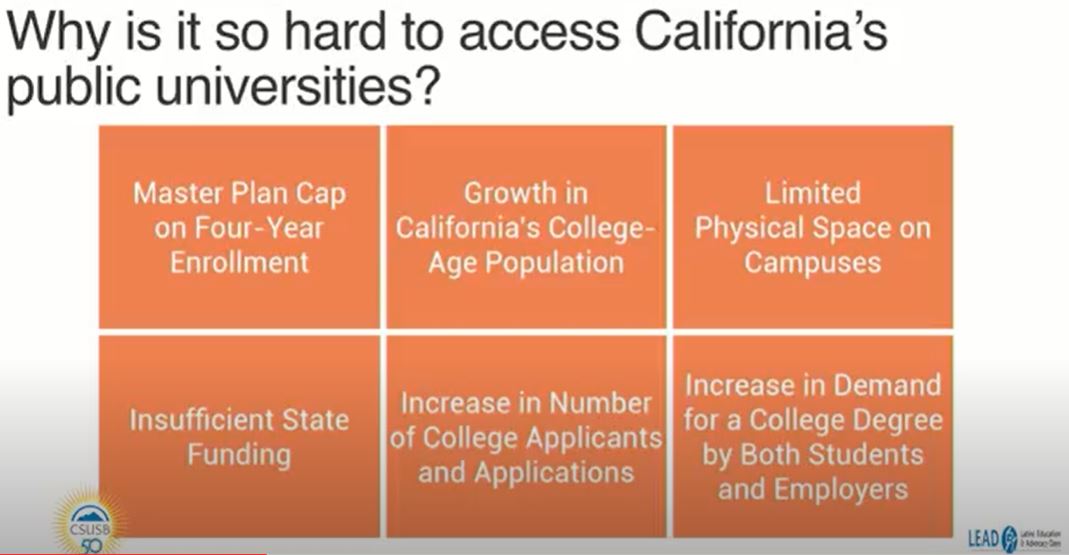 Representatives from three different groups that have advocated for greater access to California higher education will discuss perspectives on this problem. The panelists include Audrey Dow, Vice President of External Affairs and Operations for the Campaign for College Opportunity, Dr. Daniel M. Estrada, Chair of the California LULAC Latino Educational Attainment Committee, and Irene Tovar, Chair of the Statewide Coalition Against CSU Impaction.

Audrey Dow explains the recent Campaign report, “Access Denied: Rising Selectivity in California’s Public Universities.” This report highlights the mismatch between California workforce needs for college degrees and shortages of college seats in California’s public universities. Demand for college admission, among state high school and community college students, forced both the University of California (UC) and California State Universities (CSU) to raise admissions standards. The CSU calls this impaction. Coincidently, California reduced financial support for higher education from previous levels as federal spending, through student Pell Grants, increased. As state higher education spending decreased, UC tuition, since 2000, has increased by 200 percent and CSU tuition by 175 percent. Meanwhile California is 49th among states in the percentage of undergraduate students enrolled in a four year university – public or pbrivate not for profit.

Dr. Estrada discusses how the 1960 California Master Plan for Higher Education was visionary but not sustainable. Baby boomers benefited from tuition free public universities; but later generations now pay rising tuition to attend these schools. Universal access through a three tiered system of community colleges, CSU and UC campuses no longer exists. Meanwhile, baby boomers are retiring. After review of CSUs campus endowments, these funds are small for the number of students attending yearly. Also, aside from UC flagship campuses, Berkeley and UCLA, similar problems exist for other UC campuses. California’s economy confronted multiple recessions over several decades. Policy makers know that capital gains taxes are volatile. This problem causes state surpluses in one or several year(s) and deficits in others. Other states address this problem by having universities do development to build endowments and by creating state higher education trust funds. Increasing higher education investments is critical. Every state dollar invested in the CSU generates $5.43 more.

When CSU graduates’ enhanced earnings are considered this investment rises to $23 for every state dollar invested. Today 46% of all Bachelors and 32% of all Masters degrees in the state are granted by CSUs. In 2006-07 CSUs awarded 71,000 BA and 18,000 MA degrees. CSUs employ tens of thousands workers. As wage earners and consumers these workers produce tax revenues for local, state and federal government.

Ms. Tovar discusses the Statewide Coalition Against CSU Impaction’s work. This Coalition consists of labor unions, college alumni associations, and community based organizations across the state. The coalition’s first task has been public education on CSU impaction and how to address CSU admissions practices. This group is mobilizing organizations to challenge current CSU admissions practices and the CSU budget. The coalition is meeting with legislators and the governor this year on the higher education budget.

Questions for the panel discussion:
• Why have the CSU and UC increased admissions standards? Do the new admissions practices go against California’s
Master Plan for Higher Education?
• Is rejecting eligible students for admission into the CSU and UC healthy for the state economy? How is the Latino
student population and Latino community affected by changes in public university admissions standards?
• How many eligible students were denied admission into the CSU and UC?
• California is 49th in the country in terms of the number of college-aged adults enrolled in a four-year university. Can
California come up with another master plan for higher education that is sustainable and bring California back into the
top five of the country’s states in higher education?
• How can parents assist their sons or daughters for admission into the CSU or UC?